I just got back from NCMerFest in North Carolina.  I am a Mermaid performer and this is the best Mermaid convention I’ve ever been to — I had a whole year’s worth of fun and it’s only January 7.

I’ve got some tremendously great Mermaid friends who I don’t see nearly often enough.  When I got my 3D Printer for Christmas last year I decided I wanted to make some mermaid gifts for my pod-mates to give them at MerFest.  Since I’m so new to 3D printing, I wanted to keep it pretty simple, so I built on some of the other artwork I’ve been making recently and created custom mermaid LED necklaces for my 4 favorite mermaids.

I’d just finished making this Cosmic Turtle necklace for a friend as a Christmas gift.  For the mermaid necklaces I used the same basic electronics inside, with a slightly different LED configuration — I wanted lights placed in specific spots for my designs, and also I was out of Neopixel rings with no time to order more, so I used individual Neopixels in place of the rings.

I’ve tried giving LED necklaces and costume pieces as gifts before, but the breakabilty and difficulty of use has stopped me.  Most handmade electronics require removing a battery to charge it, and the connections can be so delicate that even a gentle hand can break it pretty easily.  This new design includes an onboard battery charger that plugs into a USB cable, which makes it a wonderful gift for someone who’s not ready to fix things with a soldering iron.

This was also my first crack at creating custom 3D images.  I looked all over Thingiverse and several other 3D image file source sites, and there just aren’t many mermaid shapes available.  I wanted these necklaces to be extra special and personalized, so I decided to use an image of each of the Mermaids herself as the basis for the glowing cutout in the necklace.   The shell design was one I found on Tinkercad, and the pendant part is made of simple shapes so I was able to create that directly in Tinkercad as well.   I also embossed their names on the backs of the necklaces.

They turned out absolutely stunning.

I chose an iconic photo of each mermaid, taken by the incredible Chris Crumley and Robert Minnick, to immortalize in 3D printed plastic, then painted the pendants with metallic enamel and chose LED light colors in the programming to match each mermaid’s tail colors.  The clasp is a magnet, which also doubles as an on/off switch by completing the circuit to the battery inside the pendant.

I have the coolest friends.  I think they liked them.  🙂 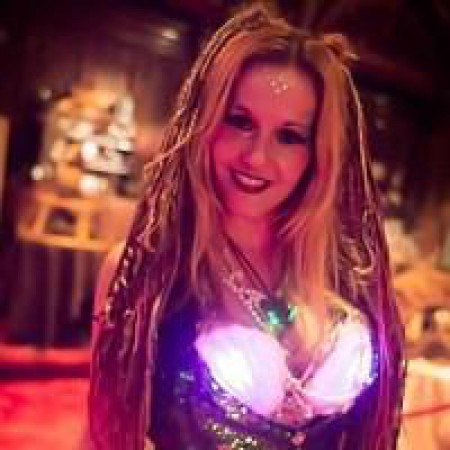